They were a striking pair around traveling around Detroit: he the famous feisty pitcher and she his younger, beautiful wife. The couple was well known in Detroit and one of the most famous sports couples in America. While that description might fit Justin Verlander and Kate Upton, they weren’t the Tigers’ first famous couple. Over a century ago, Detroit’s glamour couple was William and Nellie Donovan.

William “Wild Bill” Donovan first reached the majors in 1898, leading the National League with 25 wins and 152 walks in 1901 for Brooklyn. He then jumped leagues and joined the Tigers in 1903, when he won 17 games and paced the American League with 34 complete games. “Wild Bill” was a moniker given to him by Connie Mack, apparently not only for control issues but also his personality, as umpires once tossed him five times in one season. A native of Massachusetts, he must have enjoyed his time in Detroit, as in his first offseason in the city, Donovan found a job which kept him here during the winter months.

Seventeen-year old Nellie Stephen was a resident of Windsor, Canada. Nearly ten years younger than Wild Bill, the two met that winter, while he was an instructor at the Princess Roller Rink in Detroit. For the 1904 season, at nearly every home game, the teenaged Nellie occupied a box seat at Detroit’s Bennett Park. About a week before spring training commenced the following year, the couple tied the knot on March 5, 1905, in a quaint and mostly secret ceremony in Windsor. The couple then became wedded baseball royalty around town.

After winning 16 games in 1904, the newlywed hurler upped his victories to 18 in 1905. After a one-year slump of 9-15 in 1906, he enjoyed a rebound in 1907 with a 25-4 record in the Tigers’ first World Series season. In 1908 he continued winning and posted an 18-7 record for the Tigers and secured another World Series spot. When word was received that Donovan had won the 1908 pennant-clinching game in Chicago against the White Sox, the Detroit Free Press reported that Tigers fans spotted Nellie in her carriage in downtown Detroit and “cheered her wildly.”

#TBT Fans gather at City Hall for updates on the #Tigers' season-ending game in Chicago in 1908. The #Tigers won to clinch the pennant by a half game – via @AlexCheremeteff pic.twitter.com/MNlqB4HjYQ

Following the 1908 season, where the Tigers lost the World Series to the Chicago Cubs for the second year in a row, the Donovans were the featured in a Free Press article with the headline, “Mr. and Mrs. Wm. E. Donovan Like Detroit—All But Gossip.” The story began with “Wild Bill” talking about his disgust with losing the series again. “Yes, I am a little bit downhearted to think we didn’t make a better showing.” However, the tone of the story quickly turned to the gossip angle in the headline. Sitting in their home on Hancock Street, Bill and Nellie (whose first name was never used in the story) spouted off about the people running their mouths around town. 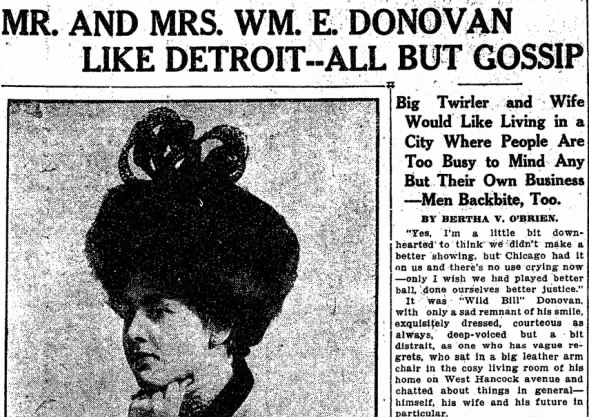 Rumors were swirling that the couple’s four-year marriage was on the rocks. Nellie adamantly denied that idea and threw her diamond-leaded hands at the reporter and said she would have to be “crazy” to leave. Bill countered that he just wanted to get his hands on the men spreading the rumors.

Bill was a solid 190 pounds at just under six feet with big blue eyes and brown hair. Nellie, who was a very pretty 5-foot-2, had brown eyes and thick brown hair. The couple was the envy of ball fans and young women around town. Bill said he believed Detroit was a beautiful place, but both agreed that they yearned for a “big city where people haven’t time to mind other people’s business.” Wild Bill didn’t see the gossip limited to “pink teas and thimble parties” among women, as he noted saloons were filled with the rumors, too.

Nellie was a bit blunter. “You know I was brought up in Windsor and there are a lot of people who can’t bear to see anyone having a good time, having beautiful clothes and diamonds and a little excitement in their lives,” she told the Free Press. “The plain truth is that they’re jealous.” Nellie mentioned she had 12 fashionable hats worth $20 a piece and a half dozen fancy suites for each season. The Tigers’ ace hurler enjoyed spending lavishly on his wife and Nellie chirped, “He’s never happy except when I’m happy.”

For the next three seasons, Donovan was a success on the diamond, including another World Series appearance in 1909, where he won Game Two against the Pittsburgh Pirates. However, by the end of 1912 Donovan’s right arm was worn out, as was his stay on the Tigers’ roster, and he was shipped out to manage the Providence, Rhode Island, minor league team. Donovan managed that club in 1913 and 1914, when Nellie apparently forgot her edict that one had to be “crazy” to leave her husband and filed for divorce in early 1915. Bill didn’t contest it and the marriage, once called “one of the rare baseball romances that occur outside of the story books,” was over. After the divorce, Donovan focused on his new job as manager of the New York Yankees.

#TBT In 1908 the #Tigers won their second of three straight pennants – photo via @AlexCheremeteff pic.twitter.com/lHVCt7MauK

To use a baseball term, Nellie already had someone in the on-deck circle. The ex-Mrs. Donovan moved way up the social ladder with her second husband, Harold Chester Barnsfield (also known as Barnefield). One of the richest men in Rhode Island, he was involved in silk manufacturing after graduating from Brown University and studying law at Harvard. Nellie and Harold met at the Providence ballpark, where “Wild Bill” had managed the previous two seasons. “Mr. Barnsfield was one of the most ardent fans and was seen at the games constantly rooting for Bill’s pennant winners,” the press reported. Nellie and H.C.’s honeymoon took the newlyweds to Buenos Aires, which was much more luxurious than her honeymoon with Bill at a relative’s house in Windsor.

Bill spent three undistinguished years behind the bench for the Yankees, occasionally entering a game as a reliever, then made two more pitching appearances with the Tigers in 1918. He returned to managing the Philadelphia Phillies in 1921, followed by two successful minor league seasons in New Haven, Connecticut. That success fueled rumors he was in line to return to the majors as Washington’s skipper. But on his way to the winter baseball meetings in Chicago, his train was stopped for a wreck on the tracks in western New York state when it was rammed from behind. Donovan was among nine people killed on the evening of December 9, 1923. The 47-year-old was buried in a family plot in Pennsylvania.

His ex-wife had spent her time travelling around the world. She and her new husband bounced between Providence, New York City, and Natick, Massachusetts, and took numerous European cruises. Their winters were spent in Miami and Palm Springs Florida, going to parties and watching polo matches. During a trip to France in 1925, the 47-year-old Mr. Barnsfield dropped dead, leaving Nellie a 38-year-old wealthy widow.

Nellie then moved around among Detroit, New York, and Los Angeles, while still spending her winters in the posh locale of southern Florida. Following World War II, Nellie’s whereabouts become hard to confirm, as is her death date and final resting place.

“Wild Bill” Donovan, the fire-balling pennant-winning pitcher and Nellie Stephen, the teenaged Canadian beauty, were one of Detroit’s first sports celebrity couples. For nearly a decade, their star shown bright, only to fade when Bill left the major leagues. As the couple had no children, they left no offspring to claim their baseball royalty. So the celebrity family of Detroit’s famous couple ended a century ago, far from where it began at the Princess Roller Rink and Bennett Park.