He brought baseball to a nationwide audience, made players famous and owners rich. Some suggest he should be in the Baseball Hall of Fame for that alone. However you look at it, John Fetzer had a tremendous impact on the Detroit Tigers and Major League Baseball. What you might not know was that Fetzer first came up with the idea for televised Monday night baseball (and was ignored), made the owners a ton of money through television contracts, kept Charlie Finley in baseball, and was seen as the de facto president of the American League.

Fetzer became enamored with communication as a young boy in Indiana, when he was intrigued by the telegraph. Radio was in its infancy while Fetzer was growing up and that soon snagged his attention. He began by working in radio, founding WKZO in Kalamazoo, Michigan, and then purchasing stations around Michigan and in Nebraska. Later, when television was in its birth stages, Fetzer latched onto that, too. In a short time, he amassed a fortune, became independently wealthy and purchased the Tigers.

Fetzer became involved with the Tigers on October 1, 1956, when he paid $1 million as a part of an 11-man syndicate of mostly broadcasting owners when they purchased the team from the family of the late Walter O. Briggs for $5.5 million. The Detroit Free Press called it the “the biggest transaction in American sports history.” The Fetzer contingent (which included actor Bing Crosby) outbid eight others, including groups led by Jack Kent Cooke, Charlie Finley, Bill Veeck, George “Papa Bear” Halas, and Lansing-based broadcaster Harold Gross. After witnessing the failure of a multi-headed management monster for four years, Fetzer purchased additional shares on October 11, 1960, to own two-thirds of the team.

July 16, 1956: #Tigers are sold to an ownership group including John Fetzer. Among the changes Fetzer will introduce is changing the name of Briggs Stadium to #TigerStadium in 1961 pic.twitter.com/H1ucuzILCY

On November 14, 1961, he spent between 1.75 and 2 million dollars to purchase the remaining stock of Fred Knorr’s estate to become sole owner of the major league franchise. The Sporting News quoted Fetzer as saying, “Baseball is too complicated. The team should be run by one individual who has the authority to make decisions and expediate them.” In the three decades of running the Tigers, Fetzer’s team captured a single World Series title in 1968 and a 1972 division title, although he was the Chairman of the Board for the team’s title in 1984.

In his book John Fetzer, On a Handshake, longtime Tigers publicist Dan Ewald detailed the magnate’s business dealings. Fetzer was placed on the Major League Baseball Television committee in 1963, and somehow convinced the owners to forgo their local broadcast contracts and negotiate a national package with revenue sharing benefitting all teams. Prior to 1963, there was no national television contract and only twelve teams (the Tigers included) unequally split the broadcast fees from CBS and NBC. The remaining clubs didn’t get any of the money. Tigers General Manager Jim Campbell later claimed that “without Mr. Fetzer’s efforts, a few For Sale signs would have cropped up around both leagues.” In a 1967 letter, Charlie Finley, owner at the time of the Kansas City Athletics, sent a letter to Fetzer. “Needless to say, our contract with NBC has been my salvation in staying in the game I love so much,” Finley wrote. “Again, my sincere thanks and appreciation.” Baseball commissioner Ford Frick instructed all teams to not cut any television deals unless Fetzer was involved. (Fetzer was also a television authority beyond baseball, chairing the TV industry’s Television Code Review Board.)

While negotiating the 1963 deal, Ewald’s book claims, trying to further nationalize American’s pastime, the Tigers’ owner pitched a Monday night Game of the Week to CBS.  Reportedly, CBS executives didn’t want to mess with ratings winners during that time slot and nixed the idea. CBS did just fine on Mondays with a lineup including “To Tell The Truth,” “I’ve Got A Secret,” “The Lucy Show,” “The Danny Thomas Show,” and “The Andy Griffith Show.” But Monday Night Baseball would eventually become a mainstay on ABC and ESPN.

Ewald believed Fetzer’s early money-making abilities caught the eye of his fellow owners. His debonair style coupled with an outwardly conservative appearance endeared him to baseball’s brass. After he went to bat for Veeck’s White Sox purchase in the mid-1970s, influential Chicago Tribune sports columnist Jerome Holtzman said that while Fetzer was one who stood in the background, “there’s no question that John Fetzer is the most powerful force in baseball.” Veeck praised Fetzer even despite bad blood between them following the 1956 bidding war for the Tigers. “The strong man in the American League is John Fetzer,” Veeck said. “He’s very intelligent, very balanced, very thoughtful. And he’s as wealthy as any. He’s a man of substance. He could influence me more than all the rest because he makes sense.” High praise from a former foe shows the measure of the man.

On October 10, 1983, Fetzer stunned the sports world by selling his beloved Tigers for $53 million to Domino’s pizza owner Tom Monaghan. According to Monaghan, the negotiations were done in secret over a two-year period; Fetzer was told to name his price and he did. 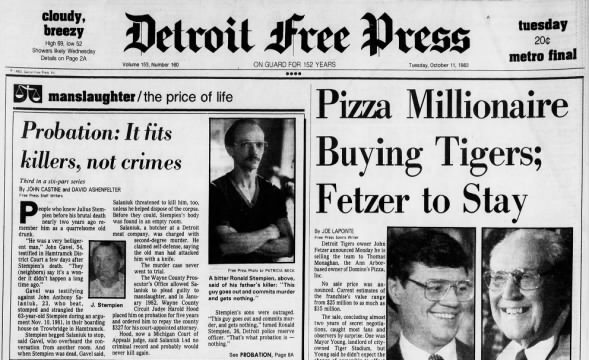 Away from the ball diamond, Fetzer quietly invested his wealth into his Fetzer Institute, which he had founded in 1962 as a spiritual think tank in Kalamazoo. “Fetzer had a marked ability to compartmentalize his professional from his spiritual life,” writes Brian Wilson in his new book John E. Fetzer and the Quest for the New Age. Nonetheless, Wilson says, Fetzer privately carried out “a lifelong spiritual search, which led … to an exploration of a variety of metaphysical religions culminating in the New Age.” Nearly three decades after Fetzer died in 1991, Wilson writes, “the Fetzer Institute continues to flourish, funding projects from alternative health care to holistic education to programs seeking to prompt love and forgiveness around the globe.”

This work stems from the same philosophy Fetzer articulated to Ewald. “Loving concern is the one ingredient that can make us successful,” Fetzer said. “It’s the glue that binds us together. We must have dedicated people all over the world who are willing to search, to research, to contribute, and to become one through love. We simply must have love as an institution.”

John E. Fetzer, spent a lifetime following a deep spiritual yearning. Today, we celebrate his birth & congratulate Brian Wilson, author of John E. Fetzer and the Quest for the New Age, who was awarded the Historical Society of Michigan's highest honor. https://t.co/xlCAqJlQ7i

Few would have foreseen Fetzer’s future when he was owner-operator of a tiny radio station in Berrien Springs, Michigan, during the Roaring 1920s. But through his work in radio and television, John Fetzer became a powerful and influential titan in the baseball world and beyond. As the Fetzer Institute seeks to make the world a better place to live—and watch baseball—the legacy of its founder is larger than sports.