By Mitch Lutzke and Nathan Bierma

One of the most iconic features of iconic Tiger Stadium was the center field flagpole. Nestled far away in the deepest part of the ballpark, it rose above the ringed two-story upper deck. The 125-foot flagpole was supposed to make the trek to Comerica Park for the 2000 season. It never did—that we know. What we don’t know is the complete history of one of the most recognizable stadium features in baseball history.

The Tiger Stadium flagpole was in the field of play, meaning that any ball that hit it or rolled behind it was live and had to be retrieved. It is doubtful the pole was as popular as Fenway’s Green Monster, the ivy-covered outfield walls of Wrigley Field, or the monuments at old Yankee Stadium. However, combine the flagpole with its cavernous corner in center field, the adjacent right field overhang, the double-decked seating, and the unique overall environment of the stadium, and the result is an enduring and beloved ballpark fixture.

The ballpark flagpole was a prominent fixture at Michigan & Trumbull even before Tiger Stadium was built. Dating back to the days of Bennett Park, Opening Day festivities in Detroit have always included the ceremonial ball toss and the raising of Old Glory—in some seasons, followed by league pennants and world championship banners. Beginning in 1902 and lasting at least five decades, Bill Finzel led his band in a march out to the flagpole and raised the stars and stripes. The Detroit Free Press would often report on Finzel’s streak each spring, once noting that in 1927 he even delayed surgery for appendicitis so that he wouldn’t miss Opening Day.  As late as 1954, the Free Press was still assuring fans that “Bill Finzel, a lively youngster of 74, will lead the band to the centerfield flagpole for the 52nd straight time.” 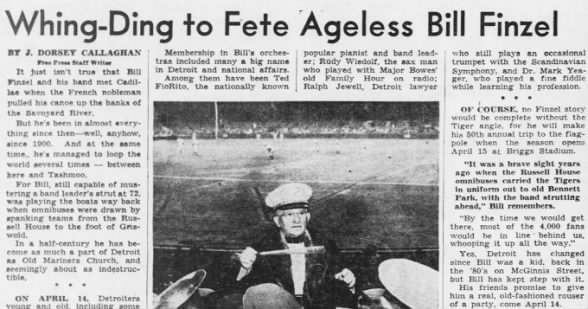 Popular lore often presumes that when Frank Navin replaced Bennett Park with his namesake field in time to open the 1912 season, the flagpole was plunked down in deep left-center-field and has remained there ever since. However, a closer look shows that the flagpole actually changed positions as outfield seating evolved around it. A Free Press photo of the first ever Opening Day at Navin Field shows flags being hoisted up a pole that stands right in front of a railing on the right field bleachers. A colorized picture of what appears to be the same ceremony makes this position more clear:

As better images emerged later in the Navin Field era, they provided a better look at where the flag stood. This panoramic view of the stadium in 1920 also shows the flagpole next to the right field bleachers. A Flagstaff Films clip of the 1934 World Series between the Tigers and the St. Louis Cardinals clearly shows the flagpole still in deep right-center-field, as does an aerial view from the same series. During the 1935 World Series against the Cubs, the flagpole is in the same place:

#TBT Navin Field (#TigerStadium) is packed for Game 1 of the 1935 World Series – photo via @OTBaseballPhoto pic.twitter.com/dmoV0LZUsU

Navin Field then underwent two significant expansions—first immediately following the Tigers’ first world championship in 1935, when a second deck was built in right field, with its famous overhang over the outfield, and then before the 1938 season, when the park was fully enclosed with double-decked seating and took the basic form it would hold until its demolition. This three-year interval was both a fluid one for the stadium, and a fuzzy one for the flagpole.

In a report on the 1935 expansion, the Free Press explained that the new second deck “will extend from the flag pole in centerfield along Trumbull.” Since Trumbull ran behind right field, that confirms a right field location for the pole. And since the article uses the flagpole as a boundary marker of the right field upper deck with no mention that it would be moved, the pole presumably stayed put. Andrew Clem’s excellent historical diagrams of the stadium keep the pole in place through 1936.

The question is what happened next, and when, in the flagpole’s lifetime. By 1938 the flagpole was at its new post in left-center-field. When exactly did it move, and why? The photographic evidence throws some curveballs. Some post-1935 photos (such as these two) appear to have the pole still standing closer to the right field seats. Other photos from before 1938, though, appear to present a different position, with the pole already at its permanent new location:

Do photos from this three-year period (most of which, alas, are undated) depict the same alignment from deceptive different angles? Or do they suggest a relocation of the flagpole that occurred at some point prior to 1938? If the pole was moved, was this to prevent obstructing the views of spectators in the farthest reaches of the newly created upper deck in right-center-field (only to create eventual obstruction on the other side in 1938)? Without further evidence from written sources, and without consistent overhead aerials, it is difficult to know for sure. Nor do we know whether the existing pole was re-used or if a new one was installed when it took its new position. It’s possible the flagpole that still stands today dates back at least as far as 1938, and perhaps earlier.

#OTD in 1938 the Tigers open a newly expanded Briggs (Tiger) Stadium: it becomes the first stadium to have upper deck seating completely surround the field. #Tigers drop their home opener to Cleveland, 4-3 pic.twitter.com/8DAPuBTQiW

What we do know is that once the pole took its familiar position, it would remain a fixture that would outlast the stadium itself. While Tiger Stadium, tragically, did not escape the wrecking ball, the flagpole was spared, and stood tall (odd as it looked in the middle of an empty field) long after the dust cleared, the last actual relic of the old ballpark. (It even starred in a Super Bowl commercial.) A 2015 picture of the flagpole shows its layers of paint, representing layers of history—from green (its original color) to blue (from a 1977 repainting of the entire stadium interior) to gray (painted for the movie 61*, filmed at the stadium shortly after it closed), interspersed with patches of brown rust.

In 2018, the Detroit Police Athletic League opened its new headquarters at the site of Tiger Stadium, with a new baseball field on the exact footprint of the original one. And standing in its familiar position was the flagpole, refurbished and painted green, with funds provided by sponsor Kar’s Nuts. As it has since at least 1938, the flagpole remains in play, just in front of the outfield wall, right where it belongs.