In 1918, the Spanish flu was ravaging the world. The Center for Disease Control estimated the flu killed 50 million people around the globe, 675,000 of them in the United States. With Covid-19 currently bashing the United States, the sports world has been placed on hold. So how did the Spanish Flu impact major league baseball 102 years ago? Not much, at least not nearly as much as World War I.

America did its best to stay out of the war. However, German torpedoes aimed at American cargo ships, the idea that Germany bullied their Allies into war, and President Woodrow Wilson’s desire to make the United States a world power all sucked the country into fighting in the summer of 1917. The major league baseball season operated as usual with 154 games in 1917 and ended in mid-October with a White Sox World Series win over the New York Giants.

#OTD in 1918 Ty Cobb makes a speech to the crowd between games of a doubleheader at the Polo Grounds announcing he will enter military service and retire from baseball after the season. After serving overseas, Cobb will return to play ten more seasons pic.twitter.com/SogwytZmHM

The 1918 baseball season commenced in April under the cloud of the world war. By May, the United States declared it needed additional military men. Secretary of War Newton Baker eventually announced all non-essential work was to be halted by September 1st. Immediately, major league officials scrambled to abide by the proclamation. While some team owners were ready to throw in the towel in late July, others held out for an extended deadline past September 1, and some even pushed for the usual October World Series. The optimists lost and the season was slashed by a month. Clubs played between 122 and 130 games that year. 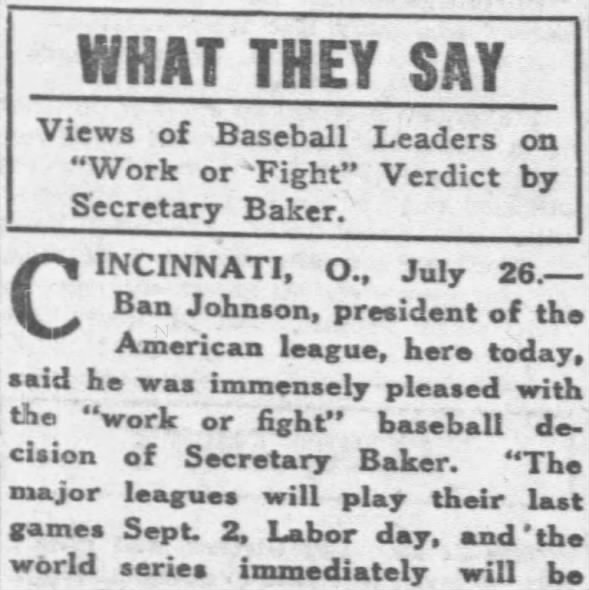 The Tigers finished the year with a record of 55-71, seventh place in the American League. In the Tigers’ final appearance—a doubleheader—on September 2, 1918, they swept a pair of poorly played home games against the Chicago White Sox, winning 11-5 and 7-3. Bernie Boland won the opener and knocked in two runs to help his cause on the mound. In the nightcap, former Tiger ace, now coach, Wild Bill Donovan (previously profiled here), made his final major league pitching appearance and recorded the win for six innings of work. Surprisingly, he was relieved by Ty Cobb (who was shifted to third base) and then left fielder Bobby Veach took over on the mound and earned the equivalent of a modern day save. Manager Hughie Jennings, at the age of 49, even played his old position, first base, in the final two innings of the finale. The military made an appearance as flyers from the nearby Selfridge Air Force base buzzed Detroit’s Navin Field, in a show of air power. 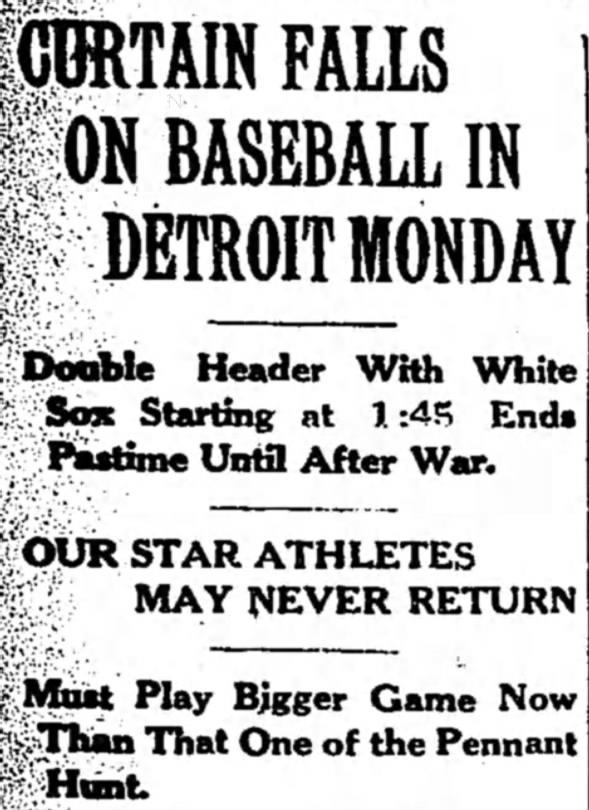 The following day’s headline in the Detroit Free Press noted the ominous signs which faced the country. “Curtain Falls on Baseball in Detroit Monday;” “Our Star Athletes May Never Return;” “Must Play Bigger Game Now Than the One of the Pennant.”  Reporter Harry Bullion wrote, “Curtains will be drawn on the great national game of baseball for the period of war, perhaps longer.” Bullion used language familiar to our crisis today: “Uncle Sam’s War Department decrees that baseball is not an essential occupation.”

In the days following the Tigers’ finale, Cobb was named as a captain in the U.S. Army, while former Tiger catcher, scout, and coach, James, “Deacon” McGuire, was also headed to the military in some capacity, though his advanced age was an issue. The final days’ starting pitchers, Donavan and Boland, along with outfielder George Cunningham, were all joining the Navy.

As the second wave of the Spanish Flu was beginning to strike the country, the Boston Red Sox clinched the World Series crown over the Chicago Cubs, on September 11. The 1918 Fall Classic (which was marked by other setbacks and suspicions) was over before the official start of fall and before much of the country had been hit by the flu.

The real sporting victims were football teams, as the war had removed many able-bodied men from the gridiron and then the flu made crowds and games a public health hazard. So, while the 1918 baseball season escaped the ravages of the pandemic, college football did not.

Some claim the Spanish Flu began in war-torn Europe and then troops spread it across the Atlantic Ocean to the United States. The flu was found on the East coast and, similar to the current pandemic, urban centers were affected first, followed by the rural areas.

In Michigan, one hot spot was the massive military base, Fort Custer in Battle Creek. The virus was declared to have invaded the camp on October 2, 1918, and it rapidly spread. Within a week, Camp Custer had 5,650 men in hospital beds suffering from the illness. In one 24-hour period, it recorded 45 deaths.

By the second week of October, the flu was evident in many mid-Michigan communities. The Lansing State Journal even blamed the spread of the disease on two Camp Custer visitors who promptly returned to the capital city and came down with the flu. Within a matter of days—just as Governor Gretchen Whitmer declared a health emergency this year—local and state officials carried out similar edicts and shuttered pool halls, movie theaters, churches, and eventually public schools. 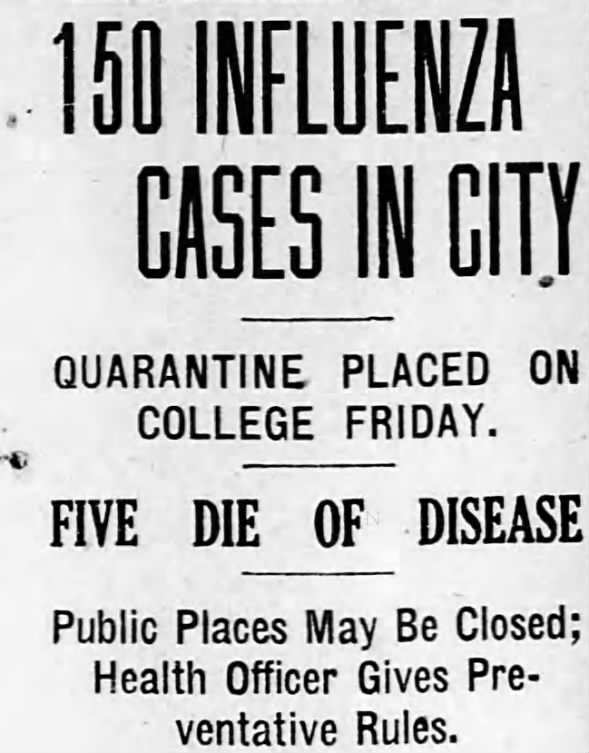 Despite the seriousness of the illness, the fighting in Europe monopolized the newsprint. In the autumn months, Allies were routinely tallying battlefield victories against the Central Powers. While the state of Michigan was mostly shutdown from mid-October to mid-November, the end of the war on November 11 caused the masses to congregate and celebrate the victory.

The language, spread, and impact of the pandemic a century ago are all familiar in the midst of the current crisis. The difference was that the flu wasn’t the biggest news story there was. And the difference in the baseball world was that an already shortened season was already over, while we now continue to wait and see if the season will ever start.