When the Detroit Tigers of the newly christened American League debuted in 1901, only one Michigan native took the field. He wasn’t a player on either team, though he likely would have enjoyed the honor. He was an umpire.

Alfred Steven Mannassau was an outfielder known for his speed and fielding prowess when he began to make the rounds of Michigan’s diamonds. Mannassau was born in Bay City but moved to Detroit as a boy. His baseball talents began to take shape in 1887, when as a teenager, he led his Greenville team in the short-lived Northern Michigan League in at-bats and stolen bases (27) and was second on the club in hits and runs.

Two years later, in 1889, he began the year with Lansing of the Michigan State League. The Sporting News noted in their July 27, 1889 edition that “Lansing has released Center Fielder Mansasau [sic] and he has signed with Burlington, Iowa, at a salary double that Lansing was paying him.” Mannassau quickly became a fan favorite with the Iowa club with his daring base-running exploits. “He is the fastest and one of the most daring base runners ever seen here.” Within a month, The Sporting News said, Burlington had “the surest outfield in the league.”

While Mannassau was hailed for his glove and legs, he was not a strong batter, usually posting a season ending mark under .240. He spent the next couple of seasons bouncing around clubs in Washington, California, with a cameo back in Lansing in 1890. In 1894 he had the rare distinction of wearing the uniform of four clubs in one season, including stops in Detroit and Grand Rapids, both members of the minor Western League. He ended his year as an umpire in that same league.

An injury to his throwing arm, which never totally healed, moved Mannassau to decide that working as an umpire would be a way to stay in baseball, and he was hired as a full-time arbiter for the Western League. By 1899, Al Mannassau had reached the majors, umpiring in the National League, where he worked 92 games. He didn’t appear in 1900 as a major league umpire, but for the 1901 season the upstart American League hired their first four arbiters and included Mannassau and Joe Cantillion, two-thirds of the outstanding 1889 Burlington outfield. 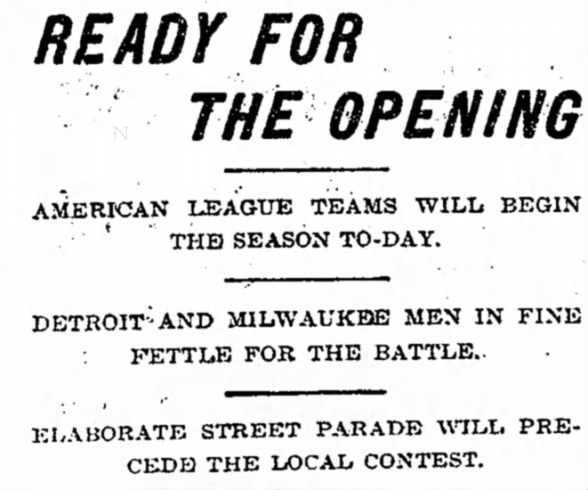 The Free Press reports Jack Sheridan will be the umpire for Opening Day in 1901, adding, “This lets Mannassau out.” But after a rainout, Mannassau was in. (Detroit Free Press, April 24, 1901, page 10)

As Detroit’s major league debut approached in late April, Jack Sheridan was tabbed as the umpire for the opening game at Bennett Park. However, there were rumors that Sheridan was too sick to work the first game and Mannassau would be substituted. On April 24, 1901, the Detroit Free Press reported, “All the stories about Jack Sheridan’s malady have been grossly exaggerated, as he has reported to [AL President] Ban Johnson and will take up his duties as usual today. This lets Mannassau out.” But then it rained on the 24th, so the American League opener against the Milwaukee Brewers was delayed a day.

When the teams finally hit the field, the Tigers fell behind 13-4 but in the bottom of the ninth they rallied for ten runs and earned the stunning victory. Mannassau (field) and Sheridan (home plate) were both umpires in the contest as League President Johnson’s goal of eliminating frequent squabbles with the umpires by using a two-man crew was a success. Commenting after the game the Free Press said “the double umpire system worked very well. There was not a kick during the game.”

As the season wore on, ill feelings still persisted between the National and upstart American Leagues, and Mannassau was used to fuel the fire. President Johnson’s crackdown against the rough handling of umpires by players and managers was his effort to market the game to a more genteel crowd. However, he apparently held grudges with players who were with NL clubs in 1900 and refused to jump the Western League, then operated by Johnson. Clark Griffith, a star player-manager with the Chicago White Sox, complained that Johnson was acting too much as a czar and quoted Mannassau as telling him “that every time a man who played with the National League last year opens his mouth on the ball field, he will be put out of the game.” That public comment probably didn’t bode well for the Michigan umpire and he was released at the end of the 1901 campaign.

Not to sit idly by, Mannassau moved to Chicago and became a nationally known billiards expert and was hired to supervise play at the Hamilton Club.  He later returned to the majors as an umpire, when the Federal League swooped him up for their first season in 1914, but was not rehired for their final 1915 campaign. He, instead, resumed his position at the Hamilton Club. In 1917 Mannassau took his billiard skills to the Detroit Athletic Club, where he operated their pool hall until his death in 1933. His obituaries all noted his baseball years, the notoriety of umping the first Tigers’ American League game and his skills with the pool cue.

From the sandlots to the minor league diamonds, Michigan’s first native son to appear in a Detroit home American League game was an umpire.

Note: The first Michigan native to play for the Tigers as a major leaguer came later in that first game, when Kalkaska’s Emil Fisk relieved Roscoe Miller and earned the victory as a result of Detroit’s surprising ten run rally.