He was born in Narrows, Georgia on December 18, 1886, and he had a forest fire inside him. Tyrus Raymond Cobb burned with a will to win. He tried harder than anyone on the field, and did whatever it took to win. Detroit Free Press writer E.A. Batchelor, who covered the Tigers at the time, says Cobb “begins to play baseball where most of the others stop.” Casey Stengel was once asked who was the greatest player he ever saw. He didn’t hesitate. He said, “I never saw anyone like Ty Cobb. No one even close to him. He was the greatest all-time ballplayer. That guy was superhuman, amazing.”

He wasn’t just the fastest, most skilled ballplayer in the game. He was probably the smartest. His wise investments in young companies like Coca-Cola and General Motors made him the game’s first millionaire. On the field, he was just as smart. Cobb used his quick wit and fast feet to drive opponents crazy. “He creates the game as he goes along,” wrote Batchelor. If he wasn’t trying to score from second on an infield groundout, he was doing something else to put pressure on the other team with his speed. He would dare you to make the perfect throw. Sometimes he would get caught, but a lot of times he would be safe, and advance on a wild, rushed throw.

His speed and brains were crucial to beating the Chicago White Sox on this day in 1912. The Navin Field crowd witnessed what the Free Press and others called one of the greatest plays in the history of the game.

The Tigers got the scoring started in this one with a Sam Crawford single, Ossie Vitt came home and it was 1-0. The Tigers had right-hander Ed Willett on the mound. The Kansan was a mainstay in the Tigers rotation through the glory years of 1907-1909. He threw a sidearm pitch that, when he controlled it, was nearly unhittable. In this one, he mowed down the hitters, inning after inning, giving up only four hits.

In the eighth, with the Tigers up 2-1, Crawford singled again, driving in Donie Bush. That led to the ninth, where Willett was looking to close out the game. First-baseman/manager Nixey Callahan led off the inning for the Sox with a walk. Ping Bodie then hammered one over Cobb’s head for a double, putting runners at second and third with nobody out. After Shano Collins popped out, Rollie Zeider hit a grounder to Bush at short. This should have been the second out. Bush grabbed it and made a bad throw to first. The ball got away from Del Gainer, both runs scored and Zeider ended up at second base. The game was tied. With the game slipping away, Willett kept his cool. Buck Weaver was the next hitter. Zeider took off for third and made it easily. Now just a sacrifice fly would give the Sox the lead. Weaver had hit the ball hard on two previous trips to the plate, but this time, Willett struck him out. With two out and representing the go-ahead run, Zeider decided to try to steal home. Catcher Oscar Stanage grabbed Willett’s next pitch came as Zeider came sliding toward the dish. Stanage blocked the plate, and Zeider tried to go around him, and was unable to touch the base. Stanage laid on top of him for the third out.

The Tigers got two on with nobody out in the bottom half, but the next three hitters went down, and the game went into extra innings. Willett had no trouble in the top of the 10th. This set up “The Greatest Play.”

#TBT Ty Cobb had 9 different types of slides. Contrary to myth, he preferred to slide away from the fielder, not into him. From @CharlesLeerhsen: pic.twitter.com/HoFSE6YAin

With one out, Cobb got a base hit. As he stood on first, Cobb had a couple of options. He could swipe second and put the winning run in scoring position. He had 61 steals that season. Or, he could just hang tight and wait for big Sam Crawford, the game’s all-time leader in triples, to put one into the gap and drive him in.

It wasn’t just the incredible hitting and base stealing that made The Georgia Peach great; it was the intangibles. Cobb hit .409 that year, but one play stood out in this great season. Crawford, the Hall of Famer, lined a single to center. Cobb hit second base and started to dig for third but held up just beyond the bag. Bodie fielded the ball and held it momentarily, thinking Cobb was going back to second. Just as he slacked up, Cobb took off for third. Bodie got over his initial surprise and fired the ball to third-baseman Lee Tannehill. The ball took a short-hop, hit Tannehill in the chest and laid in the baseline. With Cobb still charging hard for the base, he saw the ball in the baseline and made a quick decision. He slid directly at the ball with his feet and into the base. The ball rolled into the Tigers bench, and Cobb ran home with the winning run. Everything unfolding in a split second, just as he imagined it would. 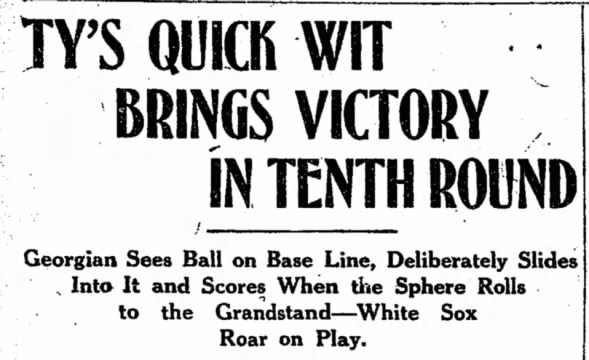 The White Sox players were furious. Tannehill joined Callahan, pitcher Ed Walsh and others to protest the play. They yelled at the umpire with a howl that seemed to rock the Navin Field stands. A player cannot intentionally kick the ball out of play. The umpire ruled that Cobb had a right to slide in the baseline, and whether it was intentional or accidental, the ball happened to roll out of play. The Sox players were still livid. They maintained it was a deliberate attempt to hit the ball. Callahan called for an official protest of the game.

#TBT Ty Cobb set an estimated 90 MLB records. His career batting average of .366 is one that still stands #TigersHistory101 pic.twitter.com/vMBrd9Erm7

Cobb had bent the rules. With his skill and his will, he allowed the Tigers to win. Callahan, while furious with what had happened, had to give The Peach credit. He called it one of the greatest plays in the history of the game. He wished Cobb were on his side. Final score: Tigers 4, White Sox 3.

This is an excerpt from The Perfect Season: How the Detroit Tigers Go 162-0 and Sweep Their Way to a World Series Championship! Used by permission of the author. You can buy the book here.

The Perfect Season: How the Detroit Tigers Go 162-0 and Sweep Their Way to a World Series Championship!

For this book, I researched every win in the history of the Detroit Tigers franchise, from 1901-2007. From this research, I put together the greatest season’s worth of games in team history. So I start with the greatest opening day ever, then the greatest second game ever, and so on, until they go 162-0 and sweep their way to a World Series championship.

If you love Tiger baseball, you’ll love this book.