An argument could be made that he is the best pitcher unknown by casual fans. This Hall of Famer played with Detroit and Grand Rapids as a minor leaguer before making his name in the majors as a young phenom. Known for his childish antics and mercurial moods, he graced two Michigan ball diamonds over a century ago.

George Edward “Rube” Waddell was elected by the Veterans Committee in 1946 to the Baseball Hall of Fame. He posted a career record of 193-143 with a 2.16 ERA, and for a seven-year period (1902- 1908) was a dominating hurler, leading the league in strikeouts six times, including in 1904 with 349. His best season may have been in 1905, when he went 27-10 with a 1.48 ERA, struck out 287 batters and posted a WHIP of 0.977. His manager during most of this timespan, Connie Mack of the Philadelphia Athletics, believed he was possibly the greatest pitcher he had ever seen. During his peak, Waddell pitched with tremendous speed, near perfect control, and featured an unhittable curveball.

Unfortunately, Waddell’s mound success was often overshadowed by his off-field antics. Reports are that he would leave clubs in spring training only to be found playing with children or marching in a parade. He once hurt his arm fighting over a straw hat. He was implicated with nefarious gambling types during a World Series and had lifelong alcohol and money issues. In his early years, he refused to pitch on Sundays as his religious parents frowned upon games on the Sabbath. Once, to capitalize on his country bumpkin “Rube” persona, Grand Rapids planned for him to ride a hay wagon into the Detroit ball park, tie the team of horses to the outfield fence and then stroll to the mound, as if nothing out of the ordinary had occurred. Only a delayed train leaving the Furniture City foiled the hijinks. The St. Paul Globe declared, “His free and easy manner is not cultivated.”

The lefthander from Pennsylvania entered the national baseball scene in 1897 as a 20-year-old for the old Louisville Colonels of the National League. Waddell posted an 0-1 record in two appearances and gave up more hits than innings pitched, demonstrating to Louisville that he needed more seasoning. So Waddell’s first minor league stint would come after his major league debut. It would happen in Michigan.

#TBT The 1899 Detroit Tigers finished third in the Western League. (Photo from the Ernie Harwell Sports Collection at the Detroit Public Library) pic.twitter.com/XNeEEsyLo3

For the 1898 campaign, the 6-foot-1, 200-pounder with an electric arm began the season with the Detroit Tigers of the Western League. He opened their season on April 20 by dropping a decision to Indianapolis, after reportedly holding the opposition batters “practically in the hollow of his hand for seven innings,” before being hit hard in the eighth. The Tigers began the season a dreadful 1-9 and by the second week of May had recorded only three wins, all coming from the arm of Waddell. On May 21, he was batted around in a sloppily played 12-5 loss which The Sporting News said “reduced Waddell’s chest measurement about six inches.” This marked Waddell’s final appearance for the Tigers. He failed to show up to practice a few days later and asked for a salary advance, which was denied by owner George Van Derbeck. A story in the Detroit Free Press painted the hurler in a negative light and characterized him as “almost impossible to manage.” His skipping of practice was nothing new, as “he has been in the habit of doing this, for it has been almost impossible to get him to attend practice with the rest of the team or comply with the club rules.” He ended up posting one of his worse stints in professional ball, at 4-4 with an ERA near six and striking out nearly as many batters as he walked. By this time, his frustration playing on a losing team and his eccentric personality led to him butting heads with Detroit officials and he bolted, reportedly over being fined $25. 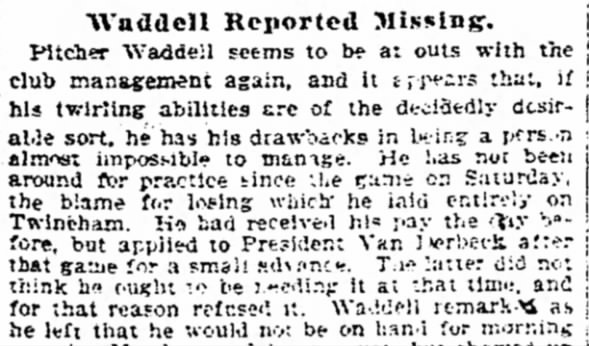 He spent the next few weeks pitching across the border in Canada. On May 28, appearing under the fictitious surname of Collesiek for the Windsor ball team, he defeated Hamilton 10-4, giving up four hits, striking out two, but walking six. A few days later, in early June, and now playing for the Chatham, Ontario, Reds, Waddell faced the barnstorming black all-star Page Fence Giants and lost, 9-1.

The Detroit Free Press characterized the hurler as ‘almost impossible to manage.’
After the Canadian adventure, in August, Waddell was playing with the independent Homestead, Pennsylvania, team near his home. Detroit believed they would be unable to persuade him to return, so they tried to trade the eccentric hurler. Waddell told the world he was happy now and wasn’t interested in returning to the minor leagues. A month later Detroit traded his rights to Columbus, Ohio. He never reported and by early October, the major league Louisville club reacquired his rights for the following season.

During spring training in 1899, Waddell must have continued to show his wildness and was loaned to Columbus of the Western League. At the time the Louisville club reportedly believed that “next year [Waddell and another pitcher would be] fast enough to hold their own in the big leagues.”

The Columbus team managed to exist until mid-July and then was relocated to Grand Rapids, Michigan, to finish the 1899 season. Waddell posted a 26-7 record that year and by August the crack left-handed pitcher was again catching scouts’ eyes, as Brooklyn purchased his rights from Louisville. However, Grand Rapids manager Tom Loftus called Waddell a “tower of strength” and refused to release him to the major leagues. Loftus said if Brooklyn provided Grand Rapids with cash and a replacement pitcher, they could swing the transaction. Eventually, Louisville un-loaned Waddell and he finished the 1899 season with them. He posted a 7-2 record and exhibited much better control than during his earlier big-league stop.

Eventually, Waddell would play for the Philadelphia Athletics where manager Mack witnessed Rube’s mound heroics. Waddell remained in the big leagues until 1910 and then continued in the minors through 1913.

Waddell’s life would end prematurely from tuberculosis in the spring of 1914 at the age of 37. Upon his death, The Sporting News printed a poem by Harold Skelton in honor of Waddell. Throughout the stanzas are comparisons to the current star hurlers of the day:

No more will batters fear his skill, For Rube Waddell is gone;
No more will he mow the batters down, As he always has done;
So, when you talk of Johnson, Wood, Bender and the rest;
Just speak one word for Rube Waddell, When he was at his best.