An infielder, an owner, a contract, a lawsuit, a Michigan Supreme Court case—they all play into the history of Detroit baseball.

When George Van Derbeck wanted to leave the west coast but remain in baseball, he selected Detroit as the place to be. Previously a pennant-winning owner in Portland, Oregon and Los Angeles , California, the businessman set his sights on Detroit for a new entry in the Western League. The 1894 season would be the city’s first year in the league, but rumors were that Van Derbeck was also eyeing a Detroit entry in the more prestigious National League.

As the 1894 season played out, Van Derbeck’s penchant for being a tightwad and a shaky owner surfaced. The Detroit Free Press noted near the end of the inaugural run of the Detroit Creams that it “worried along with a very poorly run team.” The newspaper did offer some praise for the new owner saying he “struck it right but he has made a mistake in exercising too much economy in the running of his team.” The paper harkened back to the glory years of the 1880s and claimed Detroit could drum up enough support to pay good salaries for good players. However, the paper continued that Van Derbeck blew an opportunity to spend some money early in the season to secure a better roster. The paper presumed the new owner would return for year two, but if not, “there will be as many managers for the franchise as blackbirds in a wheat field.”  With that, Van Derbeck headed into the 1895 season and searched for an improved roster. 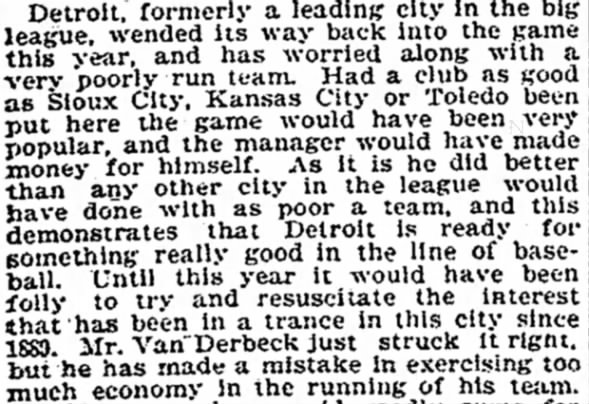 Thirty-year-old Detroit native Frank Scheibeck was just one of those players. A veteran of four major league seasons, including stints with Pittsburgh and Washington in 1894, he was a logical choice to bolster the local roster. The right-handed hitting infielder first broke into the majors with a cup of coffee for Cleveland in 1887 and later a single game appearance for the Detroit club in 1888. Van Derbeck purchased Scheibeck and another player’s contract from the major league’s Washington Senators for $300.

It was a happy April for Scheibeck, who was operating an emporium on Detroit’s Griswold Street. When word leaked of his signing, “hundreds of callers” visited his store and congratulated him on playing in Detroit. The Detroit Free Press said the infielder was in “good condition and will be in the game from the jump.”

Unfortunately, the signing of his contract was likely the high point of his time with Detroit. During an exhibition game in mid-April, while playing shortstop, a collision left Scheibeck with a knee injury. Originally believing it was a minor, Scheibeck had trouble standing the next morning. A doctor soaked and wrapped his leg and prescribed a ten-day rest period. Player-manager John Cornelius “Con” Strothers visited Scheibeck at his home during his recuperation and told the infielder to heal and he would be paid while recovering.

When opening day arrived on May 1 with Toledo in town, Scheibeck was not much better. During pre-game warm-ups both he and third baseman Harry Raymond were nursing injuries and it was said “neither man being able to move sideways for a grounder.” The Sporting News simply said the pair were in “terrible shape.” Despite their status both were promptly written into the starting lineup that day. Scheibeck went one-for-four at the plate, with a double, and was flawless in the field in a Detroit victory. However, that was Scheibeck’s last game with the club. Too injured to return to the lineup, Scheibeck’s knee received daily leg massages and it was predicted another ten days of rest before he could play again.

By the end of May, owner Van Derbeck and manager Strothers became frustrated with Scheibeck’s slow recovery and released him. A tight-fisted Van Derbeck wanted to recoup his money from the April transaction, so he stopped Scheibeck’s salary. The owner also asked for Scheibeck to pay  the $75 dollars the shortstop had promised, if they could secure his release from Washington. The Free Press claimed Scheibeck’s loss was “a severe one, and that “there is no question but that he will be playing again in a few weeks, as several teams are hot after him now.” The prediction turned out to be true, as by June he was back playing in the Western League and by the end of July, Scheiback was back in the major leagues with the Washington Senators.

The feud went public when Scheibeck filed papers in Detroit court for “salary due” and garnished $300 from Van Derbeck’s bank account. The case was to be heard in late August, but the ball player was “in the east,” unable to attend and the court appearance was delayed.

About a week later, Van Derbeck fired Strothers as the manager and said he wouldn’t pay him until he returned to the field as a regular player. Strothers claimed he wanted to be done with baseball and return home to Kansas City. Strothers said in an interview “that not a man has had any kick this season on the financial score with the president, or on any other score, for that matter, that he knows anything about.” However, Frank Scheibeck would disagree.

Following the 1895 season, Justice Simpson heard the case in a Detroit courtroom. Scheibeck claimed he agreed to pay team manager Strothers $75 for his Washington release, as the Detroit native wanted to play in his hometown. However, the short stop claimed the agreement came in conjunction with Detroit paying while rehabbing his injured leg. After a two-week delay in handing out his ruling, Scheibeck won his $255 back pay claim along with the not having to pay the $75. Van Derbeck—in the midst of moving his team to a new ballpark located at the corner of Michigan and Trumbull—immediately appealed the ruling.

The court case dragged through the Wayne County judicial system and in 1898—three years later—was still unresolved. In October, Judge J. Donovan heard testimony and found for Scheibeck. However, the court document failed to specifically include the total amount of payment. Still upset, Van Derbeck refused to pay Scheibeck and the case was back on the docket in January 1899. The owner was given ten days to pay the judgement. That apparently didn’t happen, and the case was appealed, again, this time to the Michigan Supreme Court and put on the calendar for later that fall.

In front of Michigan’s high court, Van Derbeck claimed that evidence was withheld and challenged the negotiating authority of manager Strothers. Scheibeck testified in front of the judge that Strothers came to his house and the two spoke about getting his release from Washington. Scheibeck claimed he wasn’t going to pay the $75 dollars for the release and then not be paid his full Detroit salary while injured. The shortstop contended that Van Derbeck informed him that “Strothers is my sole manager; whatever he will do, will be business with you.” After reviewing the previous court cases and Scheibeck’s testimony, the Supreme Court ruled in favor of the shortstop and granted him back pay. 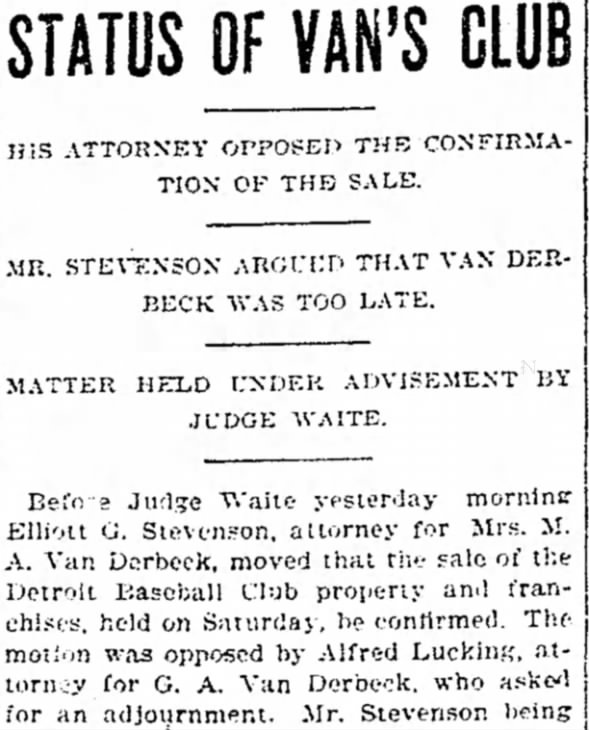 By 1900 Van Derbeck’s finances were so bad, he was close to losing the team for back taxes. In the middle of a divorce he was about to lose his major asset for back taxes. His wife’s attorney purchased the team in her name and following the final divorce decree, Mrs. Van Derbeck sold the club to a pair of men, who eventually entered the Detroit Tigers into the newly formed American League in 1901.

Image at top: The 1900 Detroit Tigers