In a season deep into a Detroit Tigers rebuild, it’s may be hard to fathom there was a time when an owner spent lavishly to improve the ball club. However, it was only a few years ago that Mike Ilitch opened signed big-time players to big salaries, as the Tigers strove for what would be an elusive World Series crown. But Ilitch wasn’t the first Tigers’ owner to spend freely in order to win. That honor may have gone to the owner who over a century ago threw big bucks at a future Hall of Fame player.

Samuel F. Angus, a bookseller turned baseball magnate, bought out his four Detroit baseball partners on August 6, 1902, and immediately opened the checkbook. Even though it was midseason, he sent Tigers’ manager Frank Dwyer on a search for an infusion of high caliber talent. Dwyer set his sights on the roster of the National League’s Cincinnati Reds, who had been recently sold and were on their third manager during a tumultuous 1902 campaign. Angus was reportedly still sore the Tigers failed to lure star Nap Lajoie to the Detroit club, so, another future Hall of Famer was targeted—Sam Crawford.

The young slugging outfielder, nicknamed “Wahoo” after his hometown in Nebraska, led the National League in home runs in 1901. His 1902 season was notable for the fact that his home runs were dramatically lower, but Crawford’s ability to leg out triples (he is still the all-time major league leader) was becoming evident.

The Sporting News chirps, “Angus wants a winning club and will have no other,” and the new owner told Dwyer to try and have players jump clubs and if that was unsuccessful, ink them for the 1903 season. The Tigers reportedly coveted Crawford and Joe Kelley and paid them a visit while the Reds were playing the Giants in New York. The Sporting Life claimed that “Frank Dwyer slipped through the Red lines after midnight and had Sam Crawford yanked out of bed (at the Sturtevant House Hotel) to receive an offer to jump to Detroit.” Rumors soon spread that the Tigers had offered big money to Crawford, well above his current $3,500 salary. The Reds were livid at the Tigers and Dwyer was characterized as a “midnight prowler” and someone who operated at “the hour when the witches prowl.”

The Reds were livid at the Tigers and manager Frank Dwyer was characterized as a ‘midnight prowler.’
At the time, the National League was viewed as the more stable baseball organization and gossip was that the American League wouldn’t open their doors in 1903. As a counter to that position, the National League owners had midway through the season cut player’s salaries in order to stay solvent. Both leagues did their best to disparage each other, and in several cities, American and National League baseball teams co-existed, which impacted their turnstiles and profits.

The pursuit of Crawford becomes a bit hazy as the budding star reportedly signed a contract with Detroit for 1903. According to The Sporting Life, Crawford agreed to a salary bump to $4,500, along with a $1,000 cash advance, which the outfielder received when he put his name on the Tiger’s contract. Cincinnati management refused to lose Crawford so easily and tried to convince their budding star the American League wouldn’t be playing any games the following season and he would be a man without a team.

The four-year professional was becoming frustrated with the entire ordeal (which he helped to create), as press reports swirled about his new Detroit deal. But Crawford refused to confirm or deny the existence of a signed Detroit contract. “I’m liable to sign with Cincinnati just to show up a few of these pinheads who know more about my business than I do myself.” 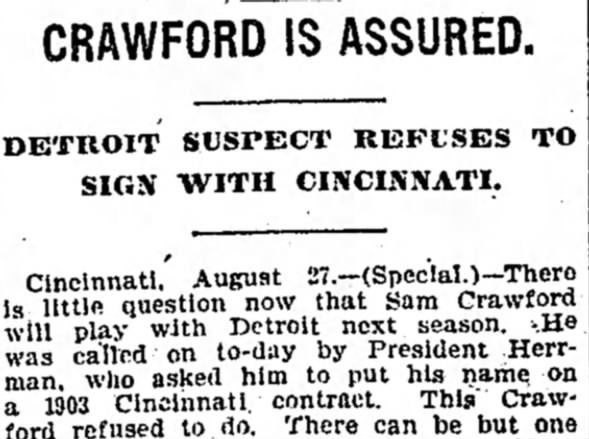 Reds team President Gerry “Gus” Herrmann met with Crawford on August 27, but “Wahoo” Sam refused to sign for 1903. Herrmann planned a follow-up meeting the next day, as Crawford was having second thoughts about leaving the Queen City. Adding to the situation, Herrmann threatened that any player who signed with another club for 1903 would be immediately released and forfeit his remaining salary. While the Detroit Free Press printed optimism, headlining a story with, “Crawford is Assured, Detroit Suspect Refuses to Sign with Cincinnati,” the Reds were also feeling better about the situation. Herrmann reported that the subsequent meeting with Crawford went well, but did admit that Sam “did not cross his heart or swear by the great jabberwock that he had not signed with the American League.” The Cincinnati Enquirer reported Crawford turned down the Reds latest offer, which was less than Detroit’s bid, but still held out hope that he would sign with the home club. The Sporting Life repeated that Crawford had already signed with the Tigers, with much thanks going to “Detroit’s fat angel, Samuel F. Angus.” 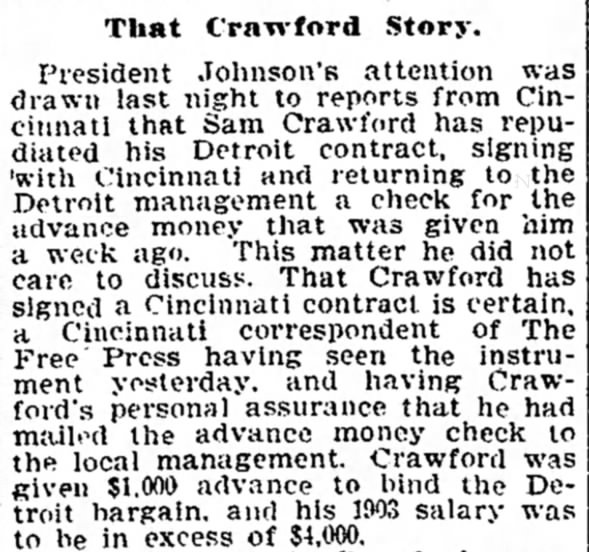 The Reds ultimately thought they had managed to get their star for the 1903 season, inking him Saturday night August 30, following a lopsided victory over the St. Louis Cardinals. Word of this second contract made its way north, as the Detroit Free Press changed its optimistic tune and confirmed the Queen City’s good fortune. Crawford had reportedly shipped back Detroit’s $1,000 cash advance in favor of a $5,000 Reds’ salary and a signing bonus. Now the Tigers were the unhappy club. Detroit had reportedly signed Crawford for $4,000 (others said $4500) and the $1,000 in cash was an advance on that salary. A person described as the Free Press’ Cincinnati correspondent personally vouched that he had seen the signed Reds’ contract and Crawford told him he had already sent back Detroit’s cash advance.

Crawford finished 1902 on a fourth-place Reds team, batted .333, led the league in triples and total bases, posted a WAR of 4.9 and secured a spot on their National League roster in 1903. But the Tigers were undeterred in their pursuit of the future Hall of Famer. Before the 1902 season concluded, the Tigers’ Angus told The Sporting Life, “You may say that when the teams line up for the beginning of next year’s pennant race, Sam Crawford will be found playing left field for Detroit.”

Angus would be proved to be correct. In what was hailed as the “Peacetime Conference” held for two days in Cincinnati in January, major league owners decided to work together for the good of the game. Crawford wasn’t the only player to have signed two contracts for 1903, as about a dozen other stars had done the same thing. A decision of the league conference was that the first contract signed would be honored and meant Crawford would be a Tiger outfielder in 1903. 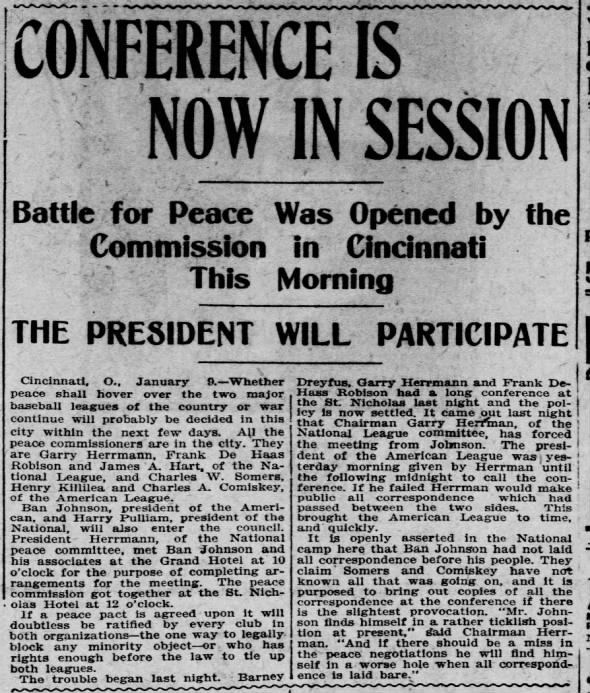 Word quickly spread as to where these stars would be playing for the upcoming season. Reached while on vacation in San Francisco, Crawford was resigned to the fact he would be changing leagues. “I had returned the advance money given me when I signed with Detroit and firmly intended to be with the Reds again this year. I’ve been with Cincinnati ever since ’99 and all my friends are there. After signing with Detroit, I regretted it, for I knew I should be homesick. This is why I agreed to return to the old team… but I’m sorry to have to quit Cincinnati.”

Crawford ultimately put the controversy behind him, as he was the second Tigers’ player to report for spring training and “looked ready for the ball field.” Wahoo Sam spent the remaining fifteen years of his Hall of Fame career starring for Detroit, as Mr. Angus joined Mr. I in luring top baseball to Detroit.

Career triples by Sam Crawford, still a major league record. Ty Cobb is second, with 297, and Honus Wagner, the National League record holder, is third with 252.

Let's hear it for longtime #Detroit @Tigers #HoF'er & Deadball Era star Wahoo Sam Crawford who has an #MLB record likely never to be broken: he hit 309 triples among his 2,961 hits. Here's his @sabr bio https://t.co/7ScdehTc64 pic.twitter.com/THfNOAPuxE

Image: Sam Crawford, 1913. Bain Collection from the Library of Congress