Most baseball players who reach the major leagues are the most famous member of their family. When right-handed pitcher Carl Zamloch made the 1913 Detroit Tigers team, it was quite an achievement. But it was a sideshow compared to the exploits of his father, Anton, a well-known performing magician.

Born in Oakland, California, Carl Zamloch gained notoriety at a young age as a baseball player in the Bay Area. After starring in a few minor leagues out West, he was spotted by Deacon McGuire, a scout for the Tigers, who signed Zamloch to a contract in 1912. He made his major league debut on May 7, 1913, when he relieved ace George Mullin in a two-inning stint. It was an eventful appearance in front of less than 6,000 fans at Detroit’s Navin Field. Zamloch struck out in his only at-bat, and on the mound, he struck out two, walked one, hit a batter, allowed two stolen bases and in the field had an assist and error. The rookie’s rocky performance didn’t matter, as the Tigers dropped a 6-0 decision to the last-place New York Yankees. Two days later, Zamloch got his first major league hit, off the Yankees’ Russ Ford, and also had another fielding error in relief of Ed Willett, who had spotted New York a bushel of runs, as the Tigers lost 9-0.

On May 18, in front of a large Sunday afternoon crowd at Navin Field, Zamloch made his first major league start against the Washington Senators. The opposing hurler was one of the greatest pitchers ever: Walter Johnson, who was on his way to a career-best 36-win season. But the rookie held his own against the legend, striking out five and allowing only six hits before being lifted for a pinch hitter in the 8th inning. The Senators scored two runs on the day, but both were unearned thanks to a miserable performance by Zamloch’s teammates in the field. Even Ty Cobb made an error that led to one of the runs. Johnson shut down Detroit and Washington won 2-1 in a game that was over in 98 minutes, but while Zamloch was given the loss, he wasn’t to blame, and his effort was lauded. “In praising Johnson, the greatest pitcher of all time, one should not lose sight of the fact that a pinfeather party named Zamloch hurled some excellent baseball,” wrote the Free Press. Another reporter went further: “Zamloch, not Johnson, was the hero of the afternoon.”

This 1913 Tigers’ squad was long removed from their three pennant winning years of 1907-1909. Their outfield of Bobby Veach, Sam Crawford and Ty Cobb was formidable, but the infield was not as talented. The pitching staff featured a middling rotation and the team hovered around the .500 mark all summer. Hughie Jennings remained the manager, but the talent and success from those pennant years were long gone, and the club finished in fifth place, 19 games under the break-even mark. The rookie Zamloch managed to last about two and a half months in the majors, posting a 1-6 record but a very respectable ERA of 2.45. However, he experienced arm trouble and was sent down to the minors. The California native never did reach the majors again.

Johnson Wins Game That Should Have Been Scoreless, Detroit Free Press, May 19, 1913 Read more

For most people, this cup of coffee would earn them bragging rights at their family reunion. But Zamloch’s major league career was only a sideshow to his famous father, a performing magician known as “Zamloch the Great.” 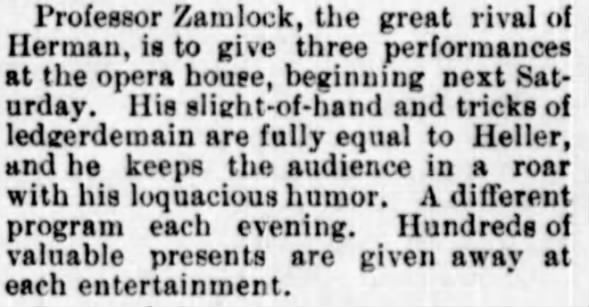 The Arizona Republic alerts readers to upcoming magic shows by Zamloch the Great, the father of Tigers pitcher Carl Zamloch. The younger Zamloch would follow in his father’s footsteps. Read more

Anton Francis Zamloch was born near Vienna, Austria, in 1849, and reportedly ran away from home to join a traveling show. He honed his magical craft in Europe and then immigrated to the United States as a teenager in the 1860s.  Zamloch settled in Oakland but traveled around the country. He amazed audiences with his magic skills, which included levitating his assistant (often his wife, Elizabeth) and various sleight-of-hand and card tricks. His high-quality stage show was a trademark for nearly four decades. An 1891 performance in Phoenix, Arizona, earned typical plaudits. “His sleight of hand and tricks of legerdemain are fully equal to [Robert] Heller, and he keeps his loquacious humor,” boasted a notice on the front page of the Arizona Republican. “A different program each evening. Hundreds of valuable presents are given away at each entertainment.”

The trickery of “The Great” passed onto the next generation as his son, Carl, was magically inclined and adopted the moniker “The Great Zam.” According to one story, the younger Zamloch once stumped the famous magician, Blackstone, with a card trick. Carl said that gave him more pride than if he had struck out Babe Ruth with the bases loaded.

Following his only season in the majors, the pitcher spent years bouncing around various minor league rosters, owning and managing the Oakland Oaks, coaching at the University of California, Berkley, and performing magic. Famed Yankee manager Joe McCarthy invited the retired pitcher to his home and asked him to perform some coin tricks. The Great Zam was apparently unimpressed with his own performance and quipped to McCarthy, referencing Yankees owner Jacob Ruppert, “Joe, when I do the tricks with coin that you’ve done with Ruppert’s, I’ll call myself a magician.”

Later in life, Zamloch left the baseball world and worked as a salesman for an oil company. However, the magic tricks were never far behind, as he would amaze customers, fellow workers, and local service organizations with his skill.  Carl chanted, “Hocus pocus, bunches of carrots,” or “Pooji, Pooji,”and the magic would begin. In 1937 the Signal Oil Company published a marketing brochure featuring 17 magic tricks by The Great Zam. Zamloch died in 1963.

As the elder Zamloch wowed crowds with magic, his son performed on both the mound and the stage. The Great Zam isn’t as famous as The Georgia Peach, the Mechanical Man, or the Bird, but he could put on a show like no other Tiger ever could.