This month left Tigers fans feeling bitter all over again about the Hall of Fame selection process and the continued exclusion of Lou Whitaker. Many blame the Baseball Writers’ Association of America (BBWAA), the beat writers association that elects candidates. The writers snubbed and dumped Whitaker in 2001, his only year on their ballot, exiling him to veterans committee consideration. What fans in Michigan might not know is that the BBWAA was born in Detroit, thanks in part to how baseball writers were treated here at the 1908 World Series. Mitch Lutzke explains.

As baseball fans’ focus moves away from the diamond during the winter months and toward the offseason awards and Hall of Fame nominees, few may realize Detroit’s vital role in the selection process. The group in charge of the elections, the Baseball Writers’ Association of America, was created a century ago in the burgeoning Motor City during one the Tigers’ World Series appearances.

The importance of this group of baseball writers is unparalleled in all of the sporting world. These scribes annually vote players into the Hall of Fame, select the Rookie of the Year, Manager of the Year, Cy Young, and Most Valuable Player awards. Off the diamond, the BBWAA names the J.G Taylor Spink Award, given to a notable reporter whose career exemplifies writing excellence.

During the 1908 World Series between Chicago and Detroit, the largest group of reporters to ever cover a World Series congregated in the two Midwestern towns. Each major league city, except one, sent scribes, as did Toledo, Indianapolis, and Toronto along with reporters from many from smaller cities. However, this mass of writers was being crowded out of the press box, in favor of local self-proclaimed big-wigs and baseball cranks.  As a result of the intolerable hospitality, big league scribes met during the series in Detroit and elected a Tigers beat reporter to be the president of their newly created organization.

Joseph S. Jackson of the Detroit Free Press was named the temporary BBWAA President, and his choice was later confirmed at a meeting in December in New York. Jackson had covered the Tigers since he arrived from Providence, Rhode Island, and witnessed the rise of Ty Cobb and a run of what would be three straight pennants for the local club. National baseball writer Fred Lieb, who would later be awarded the prestigious Spink Award, noted that Jackson possessed two traits that one admired in a baseball scribe: fine writing skills and the ability to drink any of the other reporters under the table.

Local yokels had been known to occupy space in the writer’s seats of the press box, but the 1908 World Series was the final straw, the most egregious situation yet. According to Lieb’s account, the Detroit writers were forced out of their seats and then placed on the top row of the grandstands in Chicago, while in Detroit some reporters were forced to climb a rickety ladder and sit on the roof, unprotected from the wind, rain and snow. Tigers management hired a security guard to police the press box, but this may have made things worse. “The Detroit club put its box in charge of a man who used every effort to restrict its use to legitimate workers, and yet found that it was so crowded that several men representing important newspapers were crowed out.” The Detroit Free Press, and possibly Jackson himself, further sarcastically complained that “the invasion had one good effect,” as it “varied the usual press box monotony of baseball talk and silence. There was a nice line of talk on the best methods of selling automobiles, and some strong rooting.”

Joe S. Jackson of the Free Press possessed two traits that one admired in a baseball scribe: fine writing skills and the ability to drink any of the other reporters under the table.

After this debacle, the first goal of the Baseball Writers’ Association of America would be to secure access to press boxes, and second, to clean up inconsistent box scoring issues across the two leagues. The BBWAA was only open to baseball reporters with a major league team in their town, but it encouraged minor league reporters to create a similar group for their scribes.

Originally, the writers were to meet at 11 o’clock on Tuesday, October 13, at Detroit’s Ponchartrain Hotel for the purpose of creating a national association. Apparently, earlier discussions in New York had led to an agreement to meet sometime during the World Series to form such an organization. The meeting was delayed one day, when Chicago writers failed to arrive on the train in time for the gathering. So, it was at 10 o’clock Wednesday morning, October 14, at the Ponchartrain where the BBWAA began, with the proceedings described as “a matter of much interest to the scribes.”

It was at this meeting that Jackson was formally elected President, with Irving E. Sanborn of the Chicago Tribune selected as Secretary and Tim H. Murname of the Boston Globe as Treasurer. The group named itself the Baseball Writers’ Association of America. A three-person committee was also chosen to draft a constitution and report at the group’s next meeting. 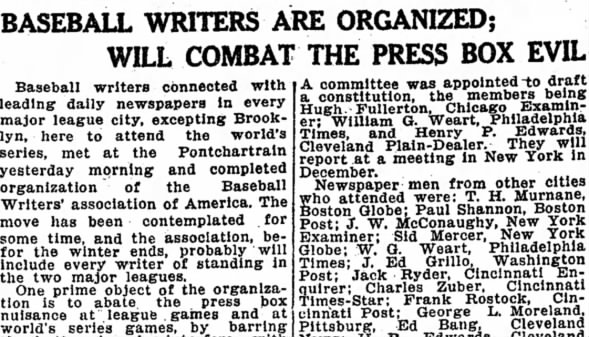 The famed New York Waldorf-Astoria Hotel was the scene of the association’s next gathering in December, where 43 reporters made the trek. Both league presidents, Ban Johnson and Harry Pulliam, reportedly “expressed lively interest” in the fledgling organization. The scribes stated again that their goals were to act in “self-defense to control the press boxes” and to add uniformity and stability to the official scoring of games across the league. The writers first scoring tasks were to clarify decisions surrounding bunts, sacrifice flies, double steals, wild pitches, and passed balls.

It appears that Jackson’s unique personality was perfect for this new group. The Free Press scribe created a “new approach to baseball writing” with a “sparkling style,” and a “droll and whimsical outlook on life.” Jackson led the BBWAA for eleven years (1908-1919), which remains the longest tenure of a president in the group’s history. Upon Jackson’s death in 1936, the famous Detroit Free Press columnist Iffy the Dopester credited the BBWAA’s first president with helping to “make baseball the great national pastime.”

So the creation of one of the sporting world’s most influential organizations came in Detroit, Michigan, many years ago, when writers were forced on the roof to cover a World Series, while locals squatting in their seats spun yarns about automobiles. Ironically, Detroit would become the Motor City, so maybe the press box banishment was just foreshadowing of the city’s place in a country which embraced, in words of the famous advertising jingle, “baseball, hot dogs, apple pie, and Chevrolet.”

Image at top: Reporters at the 1913 World Series.